Deliberate Practice: Your Tool For Ditching The 9-5 Work Week 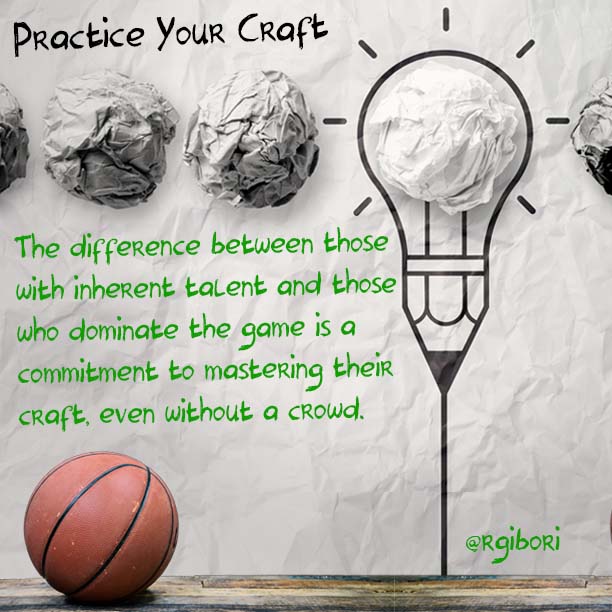 What do the people who master their craft do differently than the rest of us? Deliberate practice.

Creativity is a sport in itself. You’re not going to reach the top of your game just by showing up and working 9-5. Putting in a lot of time might make you tired, but simply working a lot isn’t enough to make you a top performer. It’s not the same thing as deliberate practice. Most people who think they are working hard are merely developing the skill of being in the gym, not the skill of making baskets. What Allen Iverson was unable to grasp, is that practice is more important than just showing up to the game with your God-given talent. The difference between those with inherent talent and those who dominate the game is a commitment to mastering your craft, even without a crowd.

Building a company is no different than building a team.

Just like a basketball player who will spend hours practicing free throws, you want players in your office that are going to put in the time to master their craft. That’s the difference.  Those who truly master their craft are the ones that do it IN AND OUT of the office. It’s part of who they are. It’s their passion, it’s in their DNA. If you want a company of All Stars, you need to cultivate a standard of excellence. It is not failure, it's opportunity.  It is not defeat, it’s the price you pay for excellence. And if you’re not willing to put in the time and effort required to discover your own greatness, then step aside. There are plenty of us that are, every single day.

I don’t have the natural talent of Kobe Bryant or the sheer brilliance of Mozart, but I’m willing to put in the time to “master my craft.”  I’m in this idea game for good; I'll win with commitment, grit, and unwavering consistency. You have to take the same approach to your work, to your goals, and to your legacy. By combining these two ideas — the consistency of “mastering your craft,” and the focus of “deliberate practice” — you will blow past most people. On a daily basis, this doesn’t have to look big or impressive, and that’s good, because it will often feel like you’re failing. What feels like struggle and frustration is often skill development and growth. What looks like little pay and no recognition is often the price you have to pay to discover your best work. In other words, what looks like failure is often the foundation of success.

Not a single person has produced incredible work without putting in a decade of practice first. How long will it take you to become elite at your craft?